Writing a new story, one about thecircular economy which is more respectful of nature.

The story of Clarins

The story of Clarins began in 1954 in rue Tronchet, Paris. In his beauty institute, Jacques Courtin-Clarins refined a massage oil with essential oils and slimming properties designed to increase the effectiveness of firming massages. Upon the request of his clients, he agrees to market it. It was the beginning of a communicative relationship based on trust, that persists to this day.

The Beauty division brings together the Clarins and My Blend brands as well as the Spas activity. 90% of production is exported to the 141 countries where the products are distributed.

In line with the philosophy of its founder, the Clarins group has its own Research and Development laboratories and produces exclusively in France. 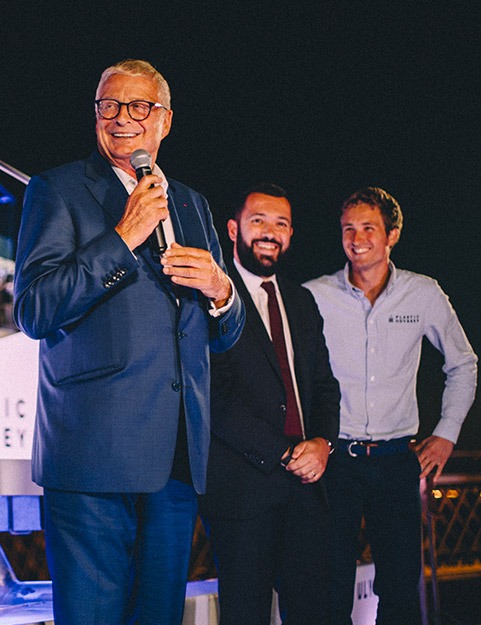 “A wonderful project, as inspiring as it is concrete.”

It is in 2017, thanks to Roland Jourdain, a renowned navigator who gathers around him the “faiseux” as he calls them, that the initial encounter took place. Christian Courtin-Clarins has, therefore, supported the Explore fund since its creation, which brings together Roland Jourdain and Sophie Varceletto, its two founders and tomorrow’s explorers. Comments: “All the lands have been discovered, all the seas have been explored. But there is still one species that is setting out to discover the future: new ways to live, to feed, to protect our planet. This is the species of the New Explorers!” Explains Roland Jourdain.

The Explore Fund supports the development of many projects, including several expeditions, such as Under The Pole, Nomade des Mers and Plastic Odyssey.

Christian Courtin-Clarins was seduced by the vision of the Plastic Odyssey association when the project was still on paper and decided to embark his group on board. The organization’s first sponsor allowed the emergence and concretization of the associative project. Indeed, it then gave birth to a laboratory vessel able to transform plastic into fuel.

A year and a half later, the project for the round-the-world expedition took shape, and it became a natural choice for Clarins to embark on this journey. An “Official” partnership has been signed for 5 years.

Clarins and Plastic Odyssey both hold a compelling vision: respect both Nature and Mankind.

Christian Courtin Clarins has pioneered crucial environmental changes within the Group. Angered by marine pollution while sailing in Asia, he took a pioneering decision in 1999 to ban plastic bags from all his outlets. Since then, products are designed to have the lowest possible impact on the environment. Plants, an essential component of the group’s manufactured products, are cultivated using organic farming – respectful of the soil – and fair trade – respectful of people. This economic activity enables the development of essential infrastructures such as schools and health centers.

As a world-renowned group in the beauty sector, Clarins, alongside Plastic Odyssey, wishes to develop and promote a circular economy that is more respectful of nature to initiate sustainable change throughout the world.

A new story is to be written together. On that is filled with concrete actions and exchanges for the present, and new ambitions for the future.

Watch more
Our website uses cookies to improve your experience. By browsing this site, you agree to their use. I consent
Politique de confidentialité